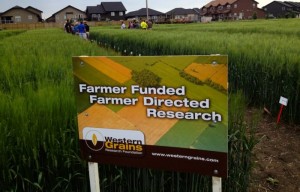 WGRF and the CDC have had a collaborative agreement for long-term breeding of barley and wheat since 1995. Since then, the CDC has released and commercialized over 30 varieties of wheat and durum with improved agronomic performance and end-use qualities.

“Farmers have been well served by this partnership with the CDC,” says Dave Sefton, WGRF Board Chair. “Farmer funding through the wheat check-offs has helped facilitate the development of dozens of well-known wheat and durum varieties, including CDC Verona, and CDC Utmost VB that offers wheat midge tolerance, to name just a few.”

“This funding builds on 20 years of collaborative research with western Canadian farmers through WGRF,” says Kofi Agblor, Managing Director of the Crop Development Centre.  “Renewed funding expands our research program in wheat to include the deployment of molecular tools to improve breeding efficiency as well incorporating agronomic and quality traits that are vital to making wheat a competitive crop for our producers”.

“WGRF is very excited about the productive pipeline of wheat varieties at the CDC,” says Garth Patterson, WGRF Executive Director. “WGRF renewing these long-term agreements helps create stability for the wheat breeding program, and allows the CDC to leverage additional dollars from different levels of government as well as other industry partners.”

Backgrounder
WGRF is a farmer funded and directed non-profit organization investing in agricultural research that benefits western Canadian producers. WGRF is the largest producer funder of variety development and field crop research in Canada. For 35 years the WGRF Board has given producers a voice in agricultural research funding decisions. WGRF manages an Endowment Fund and the wheat and barley variety development check-off funds, investing over $19 million in research in 2015.

The WGRF also provides CDC researchers with additional financial support for projects outside of these agreements. The projects involve research in areas such as plant pathology, gene sequencing and the development of new technologies that will allow plant breeders to develop new and improved cereal varieties more quickly and more efficiently.