Quantify effect of node removal and/or defoliation on soybeans.

Hail is a catastrophic weather event that can result in stem bruising, stem breakage, leaf defoliation, stand reduction and secondary effects such as increased susceptibility to lodging and pests. In Manitoba, approx. 5% of crop acres are affected annually, equating to about 4,900 field claims for crop hail damage (Wilcox 2017). On average from 2009-2018, the majority of hail events occurred from July 1 to August 31 and in soybeans specifically, the greatest losses from hail claims occur from V7 to V10, which coincides with flowering and pod fill (Wilcox, personal communication). There were some notable hail events that occurred in western Manitoba in 2013 and 2014 where farmers expressed concerns over hail adjusting procedures. In 2016 alone, there was a record 10,500 field claims for hail damage, affecting nearly 13% of annual crop acres in Manitoba (Wilcox 2017). While soybeans have been grown in Manitoba since the early 2000s, acres steadily increased to 2017 when a record 2.2M acres were seeded (MASC). The surge of the soybean industry surpassed our ability to produce regional information. The data currently used by the Canadian Crop Hail Association and local crop insurance providers to assess hail damaged soybeans is based on data from the United States. Discrepancies between current data and how soybeans recover from hail in Manitoba fields is evident. 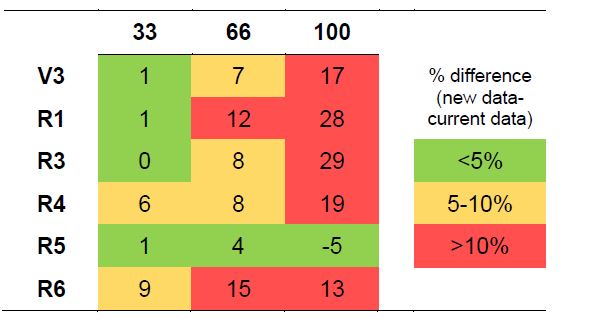